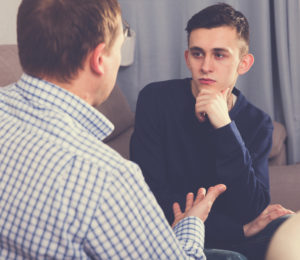 As the mother of two boys, I am concerned (okay, terrified) about the day they begin engaging in sexual activity. But it’s not just for the reasons you think.

I am not naïve. Experts recommend having “the sex talk” by middle school, if not earlier, and I have done that. I know that many kids begin experimenting sexually in high school and I am (somewhat) prepared for that. But what about college, when your kids are not under your roof anymore?

I know that the newfound freedom of college life lends itself to drinking and sexual experimentation, and that it’s important to talk about preventing unwanted pregnancy or sexually-transmitted disease. But the talk can’t stop there.

There is one more vital topic to discuss: the issue of sexual consent—for both girls and boys. We have to talk about consent with both our sons and daughters. We must explain to our kids how to protect themselves from sexual violations, as well as how to ensure that they don’t become accused of such misconduct.

The idea of your child becoming accused of sexual misconduct will probably not cross your mind at college drop-off. But it’s more prevalent than most of us realize.

Federal law requires colleges to report any type of sexual misconduct, including harassment, stalking and rape, explain Susan Stone and Kristina Supler, lawyers specializing in the defense of college students accused of Title IX and sexual misconduct allegations. All campuses have systems in place for students to report these violations and must investigate all allegations brought before them.

Some allegations may be handled within the college, while others are referred to the criminal justice system, say Stone and Supler. As co-chairs of the Student & Athlete Defense Practice Group at the law firm of Kohrman Jackson & Krantz, they represent students from campuses across the U.S. Cases referred to the criminal justice system can leave a student vulnerable to expulsion from school, and worse, possible jail time.

Each college has its own misconduct policy. Encourage your child to pay attention to it! If there is one overarching theme in these policies, it’s the issue of consent. But what is consent? Your college student needs to be crystal clear about what consent means, in every possible scenario.

“The biggest thing to be aware of,” says Supler, “is that the absence of a no does not mean yes. A lot of times our clients will say, ‘Well, he or she didn’t say no, so there was consent,’ and that’s not the case at all.”

In many cases of sexual misconduct allegations, says Supler, malicious sexual assault was not intended. Rather, it was a failure on behalf of the student to understand consent.

Understanding consent is one thing; practicing it is something else. The number one risk factor is drug and alcohol use. When drugs and alcohol are involved, there is almost no way for sex to be practiced consensually.

Most of Supler and Stone’s clients don’t have a criminal record; many are top-performing students with good reputations. However, when sex is coupled with drugs or alcohol, the risk of sexual misconduct or assault allegations increase exponentially.

The other three major factors that increase the likelihood of sexual misconduct allegations are:

There’s no easy way to broach these topics with your teenager, but sharing the information in a factual, straight-forward way is your best bet: “I know you don’t want to hear this from me, but these are the facts.”

THE MOST IMPORTANT THING TO SAY AT COLLEGE DROP-OFF

Stone and Supler, both mothers themselves, say that besides talking to your kids about these issues early and openly, your kids need to know they must come to you if they face allegations.

“If you find yourself in trouble, the first thing we want you to do is call home and tell your parents,” Stone says. “We’ve seen a lot of students find themselves charged with violating a school misconduct policy and they think they can manage it alone.”

But that only deepens the problem and makes it harder to navigate.

Does the idea of discussing this stuff make you hyperventilate and run for shelter? Too bad, say Stone and Supler.

Parents need to realize that college is different than it used to be. “The notion that you go away to college and party and anything goes—that’s really a thing of the past,” says Supler. Now, even rumors of sexual misconduct can ruin futures.

Keep in mind, says Stone, that no one is immune. It can happen at private colleges, public colleges, and on both conservative and liberal campuses.

Says Stone, “As uncomfortable as these conversations are, they must occur.”

Originally published in Your Teen Magazine